lost in time
i float

forever searching
for my home

neither past,
nor present,
nor future
embrace me

all turn
and drift away

forever searching
for my home

i turn
and drift away

When the journey concludes, time begins anew and you find yourself right back where you began.  With the exception of time and perspective, of course.  Followers of my blog may have noticed that the photo for “The Journey Begins…” and “The Journey Concludes…” are taken from the same location, a shrine in Japan.  “The Journey Begins…” photo is taken as one looks out from the shrine; while “The Journey Concludes…” photo is taken as one arrives back at the shrine and looks inward.  This symbolizes the journey coming full circle, or the end of The Past, Present, and Future.

Sometimes, though, life grants you a reprieve.  A second chance to pursue the journey, only with a glimpse of truth in your back pocket.  Such a chance, could only be described as A New Beginning…  Writing a story that deals with such a theme, though, is a journey unto itself.  So, it came as no surprise that writing A New Beginning… has come with many twists and turns.

As I have mentioned before, much of my writing comes from the dark cave in my mind.  One day, as I lit a torch and headed into the cave, I saw a mark left by a certain “Joe” that pointed in a different direction.  That mark, though, led away from the task at hand.  What’s a writer to do when they find themselves in such a conundrum?  Fortunately for me, one of the major themes that I’ve been writing about is time.  Having thought about time a great deal, in order to master its essence in my writing, I knew that it was on my side.  With the warm light of my torch shining down upon the mark, I examined it thoroughly.  Understanding my new path, I then slid through the damp cave walls on my journey to a new destination.  When I arrived, I found 23 lost poems: The poems that time forgot.  I also found my lost influences there.

In the days that followed, I lugged each poem out of the dark cave and brought each to life.  After finishing the last poem, I realized that I had found the lost treasure in my mind.  The missing piece of the The Past, Present, and Future.  I had just completed the “Lost in Time” collection.  The final, and previously missing, piece of The Past, Present, and Future.  In the days that followed, I revised the original 70 poems and combined everything.  The entire “compilation,” as I like to call it, is now complete.

With my poetry now whole, it is time to finish the book.  When that will come, I do not know.  After all, I have a new time line to introduce….   One thing that I do know, is that my lost influences still need to be lugged out of the dark cave.  There are three of them, but they’re not like the others.  No, they’re all together different.  I’ve lugged out a few parts, but each influence is a bit heavier than the previous lot.  I suppose, I’ll need more time to compose each.  A month should do.  I imagine the third day of the month would be as good a time as any to release each.  Please come back on 3/3, 4/3, and 5/3 for the unveiling of each.  After that, I suppose I’ll just have to let you know what I plan to do with my compilation.  Oh, I suppose you’ll want to know where I am at with A New Beginning… as well.  Barring anymore detours, I should make good progress between now and then.  That is, as long as I remember that time is on my side….

known only to me

on a cold autumn night

i look at the stars above me

upon the last leaves

i am only me

As I mentioned two weeks ago, sometimes past memories bubble up and explode into my consciousness.  That process has happened again, only this time it was not a memory: it was A New Beginning….  Having worked everything through in my mind, the time has come to complete what began long ago.  One last time my “Ancient Eyes” peer into the dark cavernous cave in my mind, seeking to illuminate the path that culminates with “The End of Time.”  As 2013 dwindles, my optimism grows and the feeling that I’ve been here before engulfs me.  For now, I depart on my journey to complete this project before the walls tumble down and I forget where I began….

Archibald MacLeish’s poem “An Eternity” heavily influenced my obsession with time, and the idea that the present is all that we ever get.  I addressed this concept throughout my entire collection of poetry, and specifically in my poem “The Present.”  Like MacLeish, I see the past and future as realms only reachable through the present, or now.  Without this moment, there can be no past, or future.  That being the case, both past and future flow from the ever progressing present.  Like holograms projected from the present, the past and future both exist and do not exist at the same time.  Here is how MacLeish delves into the topic:

There is no dusk to be,
There is no dawn that was,
Only there’s now, and now,
And the wind in the grass.

Days I remember of
Now in my heart, are now;
Days that I dream will bloom
White peach bough.

Dying shall never be
Now in the windy grass;
Now under shooken leaves
Death never was.

One of the great aspects of poetry is that like art, it can be interpreted multiple ways.  I see this poem as dealing with time, and the present, and containing a seize the day element.  Others, though, may see a poem wrestling with faith and rational comprehension.  In the second scenario, MacLeish’s poem may relate more to my poem “The Journey Concludes…” than to “The Present.”  Just like beauty, though, interpretation is in the eye of the beholder….

“Two roads diverged in a wood, and I,
I took the one less traveled by,
And that has made all the difference.”

Throughout our lives we make many, many choices; perhaps, as many as there are stars in the cosmos.  I believe that it is these choices that shape us, even more so than nature and nurture.  I touched upon this idea in my poem “My Apologies.”  When looking back at the past, it is easy to blame family, friends, teachers, the government, or just about anybody for the way things turned out in our lives.  When you think about it long and hard, though, you would be hard-pressed not to come to the conclusion that your choices landed you right where you are.  Sometimes choices are easy, other times they are more difficult; either way, they are yours and yours alone to make.  For Frost, taking the path less traveled made all the difference.  Hopefully, one day I’ll look back and think choosing to write again made all the difference.  I suppose time will tell….

One more time, I would like to thank everyone who read my poems. I appreciate each and every one of you. With my poetry collection now complete, I’m moving on to the second half of “The Past, Present, and Future.”  This, of course, will be my first novel.  The code name for this project is “A New Beginning,” which is how I will refer to it until it is published.  “A New Beginning” is also the quasi-beginning of a bigger project I have in mind.  As I have mentioned before, though, that is a story, or adventure, for another day….

As you can see from the updated countdown, my goal is to have “A New Beginning” published by the one-year anniversary of the creation of this blog.  In the meantime, I plan to use this blog to publish snippets from “A New Beginning” and updates on the writing process.  Additionally, I may even publish a poem from time to time.  Again, I thank everyone for their support.  Tonight I raise a glass to each of you; metaphorically, of course.  Although, I do love a good party… With that, I leave everyone for now with one last poem:

An Empty Bottle of Rum

Shaking bats from my head,
I awoke and saw an empty bottle of rum.

The laptop, that infuriating laptop,
It was there too.

Shaking out one last bat,
I knew the journey had begun.

The rum-filled days of youthful summer,
Now a thing of the past.

The responsibility of middle-aged fall,
Greeted me along my present path;

With future promise of old age,
And lazy winter days.

The rebirth of spring,
Hopefully far, far away….

Billions of years from now,
The sun’s warm light will fade away.

Even the Milky Way, and the Universe,
Will eventually cease to exist.

Time spares no one, and nothing;
But what will become of time itself?

Perhaps it is part of a big cycle,
Continuing indefinitely and unending;

Flowing forward and backward,
Throughout all of eternity.

Or maybe it will fall victim to itself,
Like light trapped in a black hole.

Still yet, maybe time doesn’t even exist;
We just choose to believe it does.

In the end, I suppose we’ll never know
As we are too intertwined. 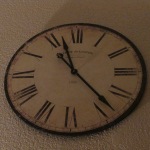 Like the sun slowly setting in the west,
All journeys must conclude one day
Leaving only a path of frail footprints.

Perhaps, watching the final sunset
One comes to realize that preservation
Depends on how well the path was tended.

In the end, one cannot go back
And care for a path that was unkempt.
The past cannot be changed.

Soon the present and future will merge,
Like the last fiery sliver of sunshine
Melting into the horizon.

In this moment, perhaps, the journey moves inward
And begins again; giving us one last opportunity
To relive the entire path in a single flash.

What a wonderful experience that would be,
A convergence of the events of a lifetime
In a brief moment of enlightenment and awe.

A momentous and brief parade of all that was,
All that is, and all that will ever be,
Sending us off to the great beyond.

I stood alone in a sea of people,
As the convergence overtook me.

The past, present, and future,
Converging together in a moment.

Bodies gyrated around me,
As melodious tunes filled the air.

The floor recoiled from the shaking bodies,
Creating the sensation of a wave beneath my feet.

Then my surroundings began to fade away,
And I saw the eclipse of a lifetime.

Like the moon traveling across the sky,
The past slowly approached the future.

Embodied as the fiery, life-giving, sun,
The future moved closer to convergence.

In an instant, the paths crossed
Creating the convergent eclipse.

Instead of seeing darkness,
I became aware, miraculously aware.

I saw all, and was seen by all;
Finally, I understood.

Lost in time, I was transfixed in the event;
As it shaped me, and I shaped it.

Suddenly the two orbs began to separate,
And I felt the baggage of the past fall from my grasp.

My adolescence now deceased, my eyes opened
Seeing the world for the first time as a man.